Have you ever gone on a research trip for your family history?  Next week I am going on my first trip.  I am so excited.  I knew my children wouldn’t be so my dad has been nice enough to care for them and the dog while my husband and I head to Bedford County, Pennsylvania (about 4 hours from our home) so I can do a cemetery search and hopefully find original land and probate records from my relatives who passed away over a hundred years ago.

Having never gone on a trip like this before, I am sure there are lots of mistakes that I am making, so I decided to watch a very informative webinar by Family Tree Webinars that was given by Nicka Smith entitled “Get Set, GO! Planning and Executing a Successful Research Trip”.  I was amazed at how many things I hadn’t really thought of doing, so that’s when I started getting my ducks in a row.

I then turned to the book I purchased about a month ago, “Organize Your Genealogy: Strategies and Solutions for Every Researcher” by Drew Smith (after listening to the Genealogy Guys Podcast I realized how knowledgeable he is, AND he sat next to me at the Meet and Greet at the Ohio Genealogical Society Conference in early May).  In his book, Drew has an entire chapter dedicated to getting organized for a research trip.

Both Nicka and Drew have various details in common:  stay focused on what you are going there to research, have a plan, call ahead – make sure the places you are going to research are open the day that you are planning on going, AND find out if what you want to research is on site for you to look through, space can be limited for historical documents and it’s entirely possible that the land records from 1873 are off-property but if you call a few days in advance, they could have them waiting there for you when you plan on being there.

“Focus” was the word.  Bright, shiny objects are always a threat when you are researching but can especially happen when you are on a research trip.  This is where apps like Evernote or OneNote can come in handy – note your find, mark down the book you found your information in and either come back to it if you found everything you were looking for – or look for it on another trip.

I know I am presently still figuring out all that I need to look at.  I have so many empty holes for specific people at various points in my tree that I am a bit overwhelmed at what exactly I am going to be looking for.  Besides visiting the Bedford County Courthouse (which is my second visit) it has been highly recommended to me to visit the Bedford County Historical Society.  I have a feeling that I may end up finding a bunch of information at the Historical Society, but I am not 100% certain what all they have (I keep getting snippets of information in my Facebook Group that they have a lot. The Historical Society also acts as the Genealogical Society as well).

You want to be as prepared as you can possibly be for your trip, as you don’t want to have driven a long way and be disappointed.

Another tip that I read in a Genealogy Gems blog by Lisa Louise Cooke is to be patient.  Things may not go as smoothly as you envisioned in your head (things seldom do) but if you keep a good mindset and roll with the punches, it will allow you to have a wonderful trip.

Below is a very simplistic page I created (reminiscent of one in the webinar by Nicka Smith) as a way to keep me focused on my cemetery search that is going to take place on Monday.  I’ve listed the cemeteries, who is buried there, and then I can come up with a few others who I am not sure where they are buried (for example, my great-great-grandmother Susan Jane Foster is buried at South Fork Cemetery, but I’m uncertain if her husband is buried there too.  He died before death certificates were mandatory (in 1899) so I don’t have a slip of paper telling me where he is buried (yet – can you say that’s part of why I’m visiting the Bedford County Historical Society) but I’m hoping that maybe I will find him buried with her (or possibly with his children as Susan Jane didn’t pass until 1943).  The purpose is to keep myself focused and I think this will do the job (like the little checkboxes?). The blank space to the right is for notes. 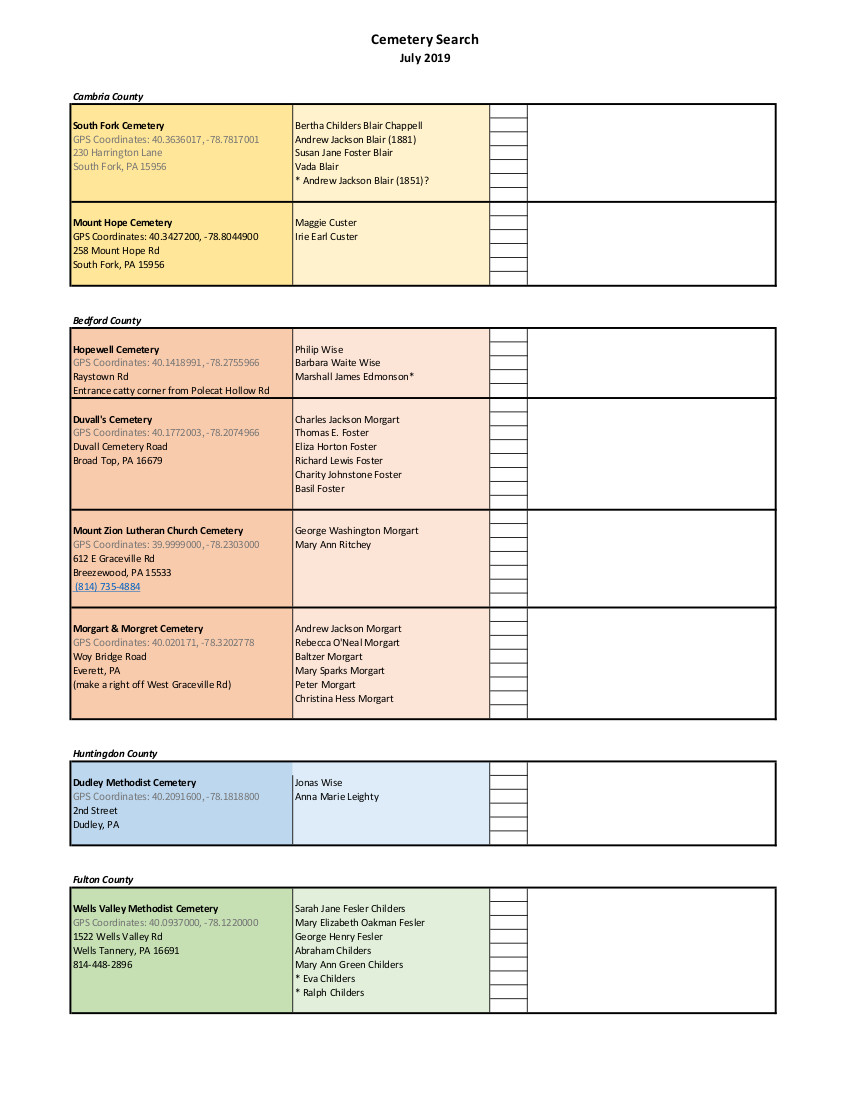 Most of those I have listed are direct line relatives.  I’m sure if I see others I’ll photograph them.  Those with an asterisk have special importance to me, so they are the exception to the direct line rule (I have essentially 3 days, I’m trying to acquire as much as I can but distant aunts, uncles, and cousins can wait).

I’ll update you on my progress next week.  My husband thought I’d be able to visit everything in just a few days.  I have relatives from Bedford, Fulton, Somerset, Cambria and Huntingdon counties in Pennsylvania, unless I am the world’s fastest and most efficient researcher, I don’t see conquering 4 counties in 2 days, not with both sides on my paternal side of my family to seek information on.

Do you have any tips or suggestions – I feel like in all I’ve read and watched I’m missing something critical to share with you.  I’m sure I’ll think of it as soon as I hit “send”. I’d love to hear about anyone’s experience on their own visits to their families homeland. I am super excited to see mine and I’m meeting with a distant cousin and will get copies of photos of family members I’ve not seen.

Last week I attended the Ohio Genealogical Society Conference in Mason, Ohio and there was one topic that was repeated no matter what the subject of the class was… FamilySearch, Ohio Archives, Finding Females, Newspapers, British Roots, Bright Shiny Objects… and that was you should always have a research plan.

I’ll confess, the closest I come to having a plan when it comes to my own genealogical journey is beginning each day with an “I think I’ll work on my great-great-great-grandfather, George Henry Fesler” today and I proceed to enter into my program all the information I have and search for the documents that I don’t.

But having a research plan can keep you focused.  It can help you from getting distracted by the beforementioned bright shiny objects (I’m sure you have come into contact with those – a document that you find or information on another ancestor that you stumble upon that you just HAVE to follow up on RIGHT NOW).

The Steps of a Research Plan 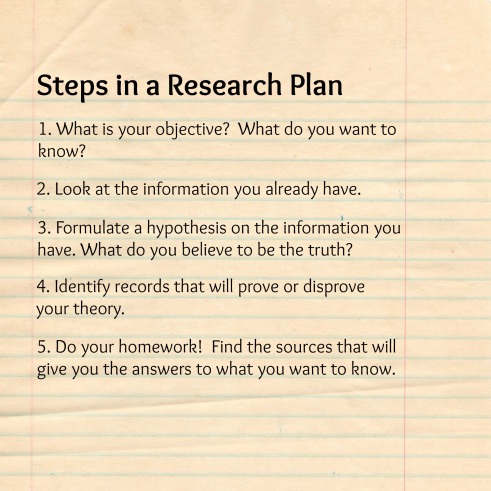 Depending on the website you seek your information from, recommended research plans seem to fall between 5 and 7 steps. Most that were gone over in my classes seemed to go with 5-steps.

1. What is Your Objective?

It’s always best to know what it is you want to know before you sit down and begin randomly searching for information.  Even I when I just decide “I’m going to work on researching my Great-Great-Great-Grandfather George Henry Fesler”, I have identified who I want to research.  I’m in the process of still adding many family members to the software that I use, or sometimes I have the basic information down (to fill in a fan chart or such) but I need to add documents, events, and sources.

2. What Information Do You Already Have?

Going back to my example of George Henry Fesler, I had a number of files that I had downloaded, and when I was adding them to my software I often don’t have the information for the citations handy and will either re-find the document on FamilySearch or Ancestry.com for this.  Here on my personal family tree on Ancestry.com I saw where I had attached George’s death certificate, but I never downloaded the file. Lucky for me my husband had a 14-day free trial of Ancestry that hadn’t been used and I was able to instantly download the death certificate (don’t worry, if this was not a possibility I would have gone to the library and used the free Ancestry Library Edition).

3. Create a Hypothesis on What You Believe to be True?

Hypothesis is such a big word.  It makes me think of tenth grade when I had to write a term paper for my Expository Writing Class.  I’m sure I learned about it in science too, but the term paper really seems to strike a chord.

According to Wikipedia, a hypothesis is “a proposed explanation for phenomenon”. Basically, it’s the information you think you will find.

Until I re-discovered his death certificate attached to my tree on Ancestry.com, I wasn’t 100% certain where George passed.

4. What Records Will Prove Your Hypothesis?

To prove or disprove your hypothesis you will need to find records that will either support or discredit what you believe.  These are often government documents such as census records, death certificates, pension files, or published records such as city directories, or an obituary in the paper.

What records will I need to prove that George Henry Fesler died in Wells Tannery, Pennsylvania?  I know that his death certificate will be helpful, possibly his grave, census records could assist with letting me know precise locations of where he lived every ten years before his death. Where he is buried helps, but a person can die anywhere (my great-great-grandmother’s 2nd husband died on a trip visiting family in Illinois and he lived in Akron, Ohio), often they live in the vicinity of where they are buried or reside.

Now you find those documents I mentioned above that you don’t have.  I was lucky enough to discover my great-great-great-grandfather’s death certificate was somewhat in my possession.  George actually lived in Wells Township in Fulton County, Pennsylvania pretty much his entire life.  He is buried at Wells Valley Methodist Cemetery in Wells Tannery.  He was born in Bedford County, but all the census’ from 1850-1910 have him living in Wells Township.

A Way to Stay Focused

Researching with a plan is going to be my new motto.  It’s one thing to attend maybe one or two classes where it was mentioned – but I attended 6 classes each day at the Ohio Genealogical Society Conference (and I went to 6 classes each day – despite recommendations to possibly sit out a time to mingle with others – there was too much to learn) and I would say at least 3 classes each day began with how important research plans are.

Research plans help you stay focused.  Sure you’re going to come across bright shiny objects but as Lisa Louise Cooke stated – “embrace them, save them for later” and keep your focus on your task at hand.  You can always spend time another day just following up on those unexpected gems.

So the next time you decide to sit down for a spell of working on your family history, trying creating a research plan and let me know if you find it to be helpful or a hindrance.