Over the course of 2020 I have been participating in the genealogy writing challenge of 52 Ancestors in 52 Weeks that Amy Johnson Crow puts on each year.  This week’s topic is “My Favorite Discovery” and as I sit here and think about what I can write about, there are so many finds flitting through my brain that bring a smile to my face… my DNA discovery that the man named on my grandmother’s birth certificate was not my grandmother’s father popped into my head, but as I sit here 1 week away from my birthday I know my favorite discovery was just re-brought to my attention in the form of a Facebook memory just last Sunday, February 9, when I discovered 3 years ago that my 5th-great-grandfather was at the Battle of Yorktown and saw Cornwallis surrender to my hero, General George Washington. 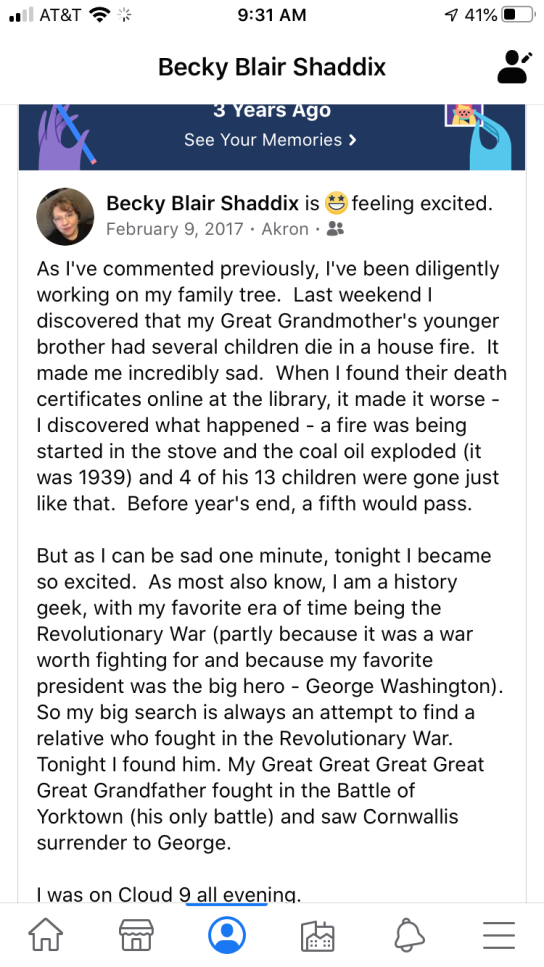 You see, I was born on George Washington’s birthday (I know, old news as I mention it from time to time), so after being told this my entire life, one of the first biographies I ever read in school was about George.  The more I read, the more I admired George (pardon my familiarity, I like to think he would understand my calling him by his first name). Yes, he is flawed.  Like many of those who were responsible for building the foundations of our new country, they made mistakes, compromising things for “the greater good” only to have it come back and haunt them 200+ years later.

But George never had an easy job despite being the only unanimously voted president of the United States.  Many wanted him to be a king, but we just overthrew king-rule, he knew that wasn’t what was best for our country.  Putting all the precedents in place to create the land we now live in wasn’t easy, but it’s one of the reasons I genuinely feel that George Washington was our greatest president.

But when I learned that my relative witnessed Cornwallis’ surrender at Yorktown literally gave me chills.  That he was related to me through my Grandma Blair (Anna Maria Morgart) was even better, she was the best friend I will probably ever have.

Peter Morgart is my 5th-great-grandfather who was born in 18 April 1758 in New Jersey.  His family moved to Virginia and he signed up and ended up being at the battle of Yorktown. 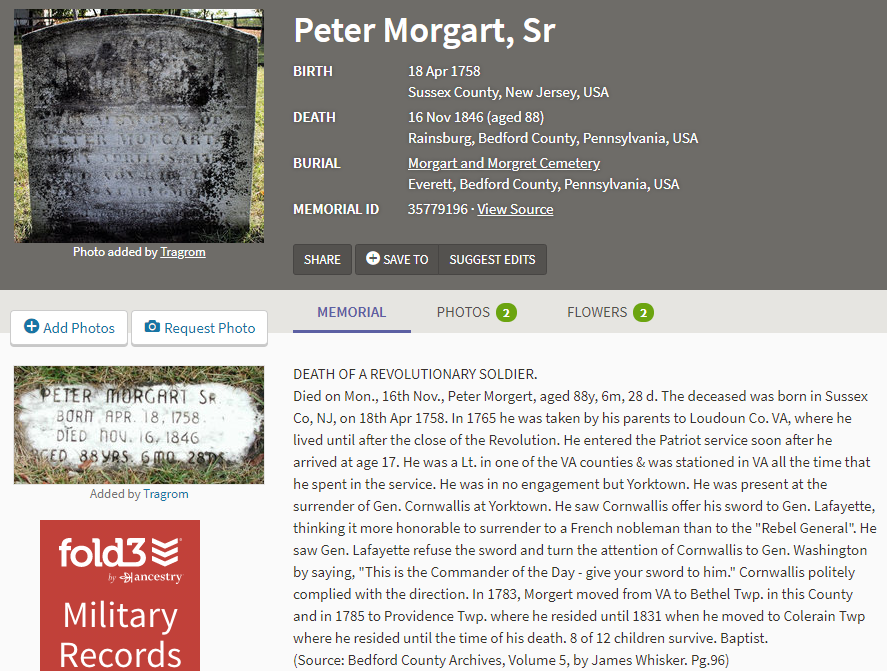 If you want to get better about writing about your ancestors, the 52 Ancestors in 52 Weeks is a great opportunity.  As you can see from my own headings for this challenge I have not participated in each week as sometimes I can strain the brain trying to find someone to fit a category and it doesn’t always jump out at me.  First and foremost this is a fun activity, so don’t overstress if you don’t have something to write about each week.  But I do recommend it as practice always helps you share the stories about your relatives.