A week or so ago I decided my living room had had enough and I needed to move the last of my stuff up into the attic where I planned on storing my genealogy research. Once there I decided to go through one of the boxes I’d found a few weeks before because I was surprised to find my sisters and my school photos.

But as I looked at the photos of my sister and me as we each wore the same dress in different grades with even the same barrette in our hair, it was what was underneath that made me even happier.

It all goes back to when I began doing my genealogy a couple of years ago, one of my first initial puzzles was my great-great-grandmother Mazie Lorenia Warner.  I had such a difficult time finding her in the census and things because you would be surprised how messed up the name Mazie can be in “official” documents.  Magie in one, which is at least close, Daysa in another, because that makes sense.  As I found more and more out about her the more I began creating a personality for her, as she seems like a wonderful and caring woman, especially in regard to her children.  She was always letting her children move back home when relationships didn’t work out or finding a new home for herself to let her children have the existing home to help them get started on their own.  I discovered this trend as I saved City Directory after City Directory.

The one thing all the documents didn’t provide was what Mazie looked like.

But then going through this box of photos I stumbled across pictures that must have belonged to my great grandmother.  I found a photo of Mazie and I was so incredibly happy. I literally had tears of joy, immediately calling my husband because I was so thrilled. 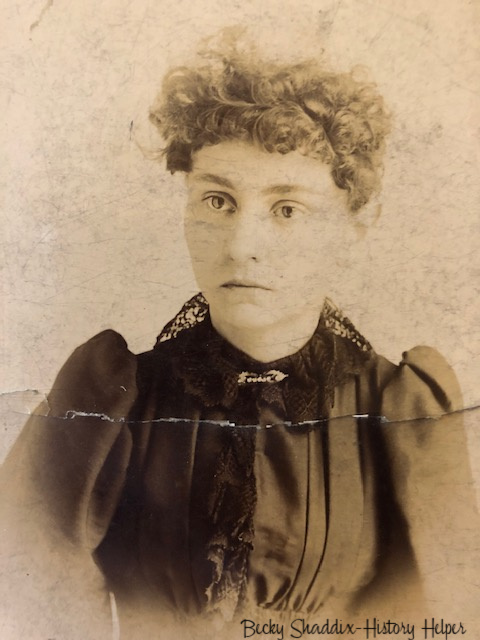 Next up is making sure I find the right products to store such treasures.  Along with the photo of Mazie was one of her mother, Orienta Gustine Warner (this had me thinking as my grandmother had it titled “Great Grandmother Warner” – it made me think Mazie because I am so used to associating maiden names with my female ancestors, and then I realized who she really meant).

Now I’m curious as to what other great finds are awaiting me in my boxes of photos. The ones in the header of my blog here are my relatives – the baby is my great-grandfather who was born in 1873 while the group shot is my 2 paternal great grandmothers, my beloved Grandma Blair, and my grandfather, affectionately called Pappy (he passed when I was 2).  Those 2 photos I found in a box of pictures from my Grandma Blair, and I know her niece may have an adult photo of my her dad (the baby).

I hope you are lucky enough to have such wonderful finds in your own family history quest. If you have been fortunate please share in the comments below.

View all posts by Becky